These are notes taken while working through Assembly Language Step-by-Step, 3rd Ed. by Jeff Duntemann. It's a great book which I recommend to anyone interested in learning x86 assembly programming.

I like the approach Casey Muratori takes to structuring projects in the early Handmade Hero videos.

It's two directories, one for the source code and another for the built artifact (binary).

The code directory also has a build.sh script in it:

There are several different ways assembly code can be compiled, depending on whether it's 64 bit or 32 bit, whether the code includes C library calls, etc. At this point, there's no sense getting clever about it: just comment out what's not needed for the current source file.

I prefer Emacs for most things. However, the GDB interface for Emacs is simply horrible (this is unusual for Emacs). It takes control of the windows, forces their arrangement, and generally makes for a miserable experience.

After an annoying amount of fiddling, I came up with the following:

The best solution for debugging I've found is to use straight gdb from the command-line. They provide an awesome text user interface (TUI) in addition to the plain text interface. I found it best to use a directory local init file to set the TUI up for my assembly projects. This way, the configuration didn't get in the way of any non-assembly debugging.

As of GDB 7.5, GDB will only load trusted init files. This means that simply putting a .gdbinit in the project directory won't work. You must tell GDB what's safe to load.

GDB reads init files based on some directory ordering. By default, I believe, it looks in the home directory first.

My installation (or first run of GDB) created a .gdbinit file:

The first two lines were there by default. The first line tells GDB where it can look for debug information. To quote the docs,

The second line sets a safe path for any GDB extensions the user may have installed.

The third line was added by me. It says that any path in this directory or below is safe to load.

Create a file called .gdbinit in the project directory.

The first line sets the assembly language to Intel which is what the book uses. GDB defaults to 68000.

The next two lines set up the TUI. The layout command enables interfaces for registers (regs) and the code (asm). 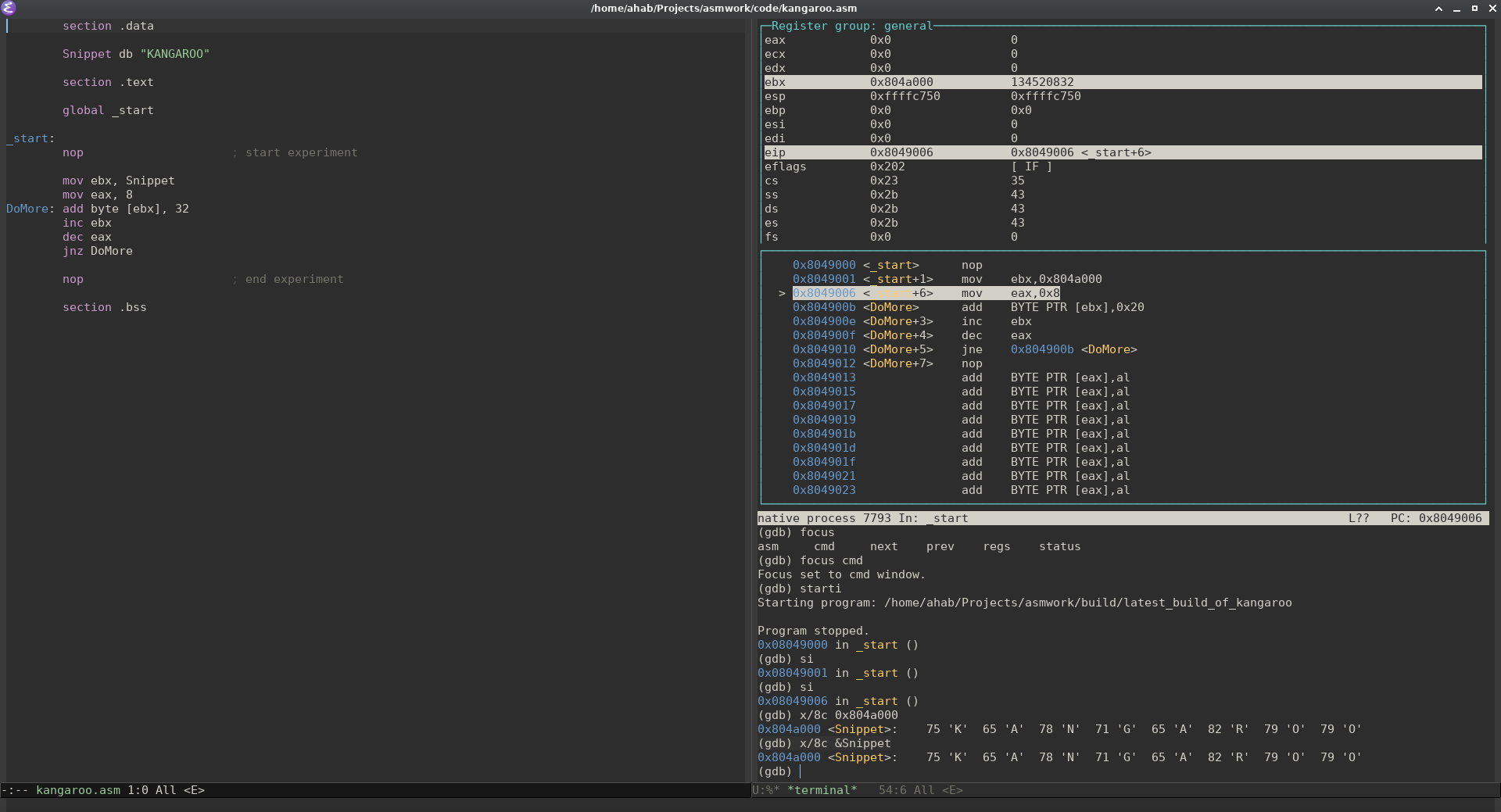 Use focus to switch between the windows.

Start debugging assembly with starti (start instruction level debugging) and use si to step through each instruction.

Since labels are memory addresses, we can use either as the address. However, in GDB, you must use the address of the label1.

Working with memory addresses requires a "hardware breakpoint". This requires use of Valgrind. However, since the book has us compiling in 32 bit, Valgrind throws the error:

The error is because Valgrind no longer supports 32-bit x86. The last release that appears to is 3.12:

This means that I'd likely have to compile 3.12 from source. However, since I'm on Guix, I may be able to easy. The definition for Valgrind is not large.

Assembler syntax is separate from the base machine opcodes!